A new theme park, built on the original site of Jurassic Park, creates a genetically modified hybrid dinosaur, which escapes containment and goes on a killing spree.

I’m always up for reboots, sequels, prequels or whatever ways that studios want to bring me back to a world that I love especially one that I have loved since a child much like Jurassic park but Jurassic world takes everything we love about the original movie and throws it in the toilet, takes a large dump on it and then leaves it to fester….

There are 2 positives in this movie and I’ll start with them: 1. The visuals and cinematography at times have you flash backs to the first time you saw the park in the original Jurassic park and it is genuinely breath-taking along with the design of the dinosaurs regardless of if they were CGI or practical effects they are believable and well done. (Standing ovation) and the second thing well there isn’t I lied (don’t judge me) but outside of visuals that there are zero redeeming qualities.

This is a huge waste of a half decent cast of actors you never want to turn down a role like this but now your associated with arguable the worst movie in the franchise. The characters in this are bland and one dimensional even though they try to so hard to avoid it there is just no escaping it; the evil scientist, the helpless kids, the helpless female who is actually not helpless and saves the day, and the guy who knows everything. We have seen all these characters in other movies done so much better after the first 15 minutes I was ready to get up and leave.

Every twist and turn in this movie you can see coming five miles away except for the demise of the main dinosaur I didn’t see that coming at all but generally how we got there just couldn’t have been worse with Bryce Dallas Howard running away from a T-Rex that’s been caged for who knows how long while in high heels! REALLY? Like REALLY?

This move makes the Jurassic park franchise look like a bigger joke than it already is after JP:3 the dry and forced humour in this movie is pathetic and I would of rather if this movie was rated R and returned to the roots of a action thriller which builds up suspense and genuinely frightens you

. Its so sad to this franchise go the same way transformers is going with making movies that are terrible but being happy with Box office numbers as a fan I can only be disappointed but I’m sure a fat cat somewhere is laughing. This movie sucks!!!

Jurassic world takes everything we love about the original movie and throws it in the toilet, takes a large dump on it and then leaves it to fester….

Don’t buy/rent or even watch for free on Netflix it’s a waste of time and if you’re a fan of Jurassic park don’t watch it fall lower in graces because of this movie.

P.S. I would really like to meet the executive who agreed to run with the premise of a velociraptor tamer (Like that’s not going to go south quickly) 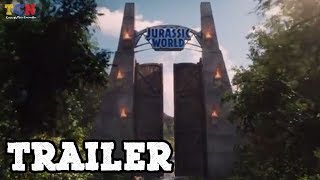