After the re-emergence of the world's first mutant, world-destroyer Apocalypse, the X-Men must unite to defeat his extinction level plan.

We finally get a glimpse as to where it all could have started, the god of all mutants Apocalypse. But not all gods are worshiped as there is a struggle to see that his plans fail but even this is folded and from there we know the X-men would have trouble coming their way. It was good to see how Apocalypse is able to obtain such power and at the same time be so hated. It just remind me of the present day where mutants are also feared and hated but we do get a clear induction that he would rather rule his people with an iron fist than to walk among them as equals.

Yet again Quicksilver steals the show! I didn’t think he could steal the show yet again but he was certainly the highlight of the movie. They are on to something when it comes to the speedster going through a slow mo realm of the world. Just the way he can interact with the world at that speed just for them to display it in such a insane approach is great to see. It was just a shame that it was just in the middle. Surely you would have action sequences to either get better or stay at the same level of octane madness but sadly this was not delivered.

We get to see the young faces of Scott Summers and Jean Grey join the School for Gifted Youngsters and seeing their powers from a young age as they yet to control them. It was good to see this as you can imagine as a youngster they are yet to realise the full potential of themselves as a regular person, but could you imagine adding a mutation on top of that?!

There were some parts of the CGI that seem to be put together by another team of amateurs. For such a high budget film you would think that the CGI throughout would have been polished and seamless to go with the look of the film but it would pull me out of the experience to think what a mess.

When introducing the new cast such as Storm and Psylocke we actually didn’t get to know some of them at all. There was very little back story to them and even after that very little notion as to what they want apart from power. A little monologue, seeing more as to how they came to their mutagen, the vastness of their powers, anything could have helped but instead left with vagueness of they are just mutant.

The final fight was actually nothing special, not even the best part of the movie as that ship had already sailed and made littl

e sense. Magneto was floating in the air for god knows how long. Cyclops should be dead, just like how Apocalypse killed that seller in the beginning of the film. Yes he was taking on all of them, but this mutant would just have to lift his finger and there would be nothing none of them could do about it. Yet, all the X-men were spared, not a single death, which the movie built up how powerful and unstoppable this new threat is. So they died elsewhere which was laughable too.

For such a high budget film you would think that the CGI throughout would have been polished and seamless to go with the look of the film but it would pull me out of the experience to think what a mess.

To buy or not to buy

At this point the X men back from in the 80’s is not a bad run. This is a buy as it can be enjoyable to put something in the background or when you are around with a few friends. 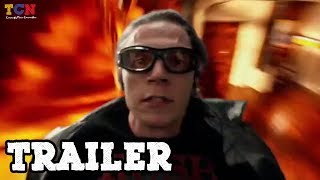