In the near future, Major is the first of her kind: A human saved from a terrible crash, who is cyber-enhanced to be a perfect soldier devoted to stopping the world's most dangerous criminals.

The fans have been waiting for classic anime turned live-action big screen adaptation and we get Ghost in the Shell. Just when you thought all the cliches of the nineties could have been left behind they were carried all the way into the new millennium. It is clear from the get go that some things should be left alone, and if they are to be reprised then only those with a good understanding of the background from where the source material came from should try as it would come off as authentic. Movies like this is the reason I do not believe Hollywood does not care about the source material. I am yet to come across a good adaptation let alone a re-imagination of the film, and they can’t even seem to do that right.

I have got to admit the look and feel of the world is amazing, the city is alive and vibrate. We get that feel of how the future would look like while still being somewhat dated, in a time where cybernetics are taking over as a means of pushing technology forward it was good to see not everything got the same treatment. The robots and cyber-enhanced population looked great as they suited the world around them. Different people with different mods looked the part including the main characters, they did take some nods from the anime and how it should look but really does seem like it ended there…

First and foremost, Scarlett Johansson performance was way off to me. I know she is basically a cyborg but she went over the top to the point where she took ques from both being a cyborg and how anime characters look. It like look natural when it is done in a animation with half body stares and elongated looks but she certainly didn’t translated well to film. She was so rigid at times it made no sense to the times she was more human like, it was like she couldn’t make up her mind to be RoboCop or Sonny from I, Robot. And what is crazy is that Kuze (Michael Pitt) seems more comfortable in his role as a enhanced and he was the experiment. You can tell he was banged up with a few nuts and bolts missing but he sure didn’t act like his body could do one angle at a time.

With the direction of this movie it did feel like there was trying to fill the ghost in the shell, and a rather empty shell at that. The script really did make characters feel like their motives were just cliche and just did it for the sake of doing it rather than having that pivot part to make you believe why they did anything. Only one character made me feel like they had real purpose as to why they were doing things, the others just seem to be ticking off boxes and still adding nothing. I am not expecting a crazy list of well known actors to pull of Oscar worth performances but this was so shallow even they knew all they had to do was paddle. Some conversations seemed disjointed, characters would talk to each other like they only just met even if we are given the vibe they have known each other for sometime. And only one speaking Japanese person out of the whole cast? And no one spoke Japanese back?! Just Japanese to English conversations? This took me out of it every time as this was just lazy.

While action scenes can look visually great it  stopped there as not much thought went into how they should actually look. Poor use of slo-mo as this made fight scenes look unimpressive when hits actually landed, you could tell when they were using a harness as stuntmen would awkwardly glide through the air in a low budget ballerina show. It really did show how talent-less the team was in this department. Some scenes would just end without any given explanation as to what really happened, they just want you to figure that out all in your head than rather show it to you on screen.  I’m not expecting some John Woo style showdowns but this was just down right awful.

It was pretty clear what the budget when on Scarlett, the visuals, rights to the franchise, higher ups behind the scenes, production team, marketing. And with all that said, I still don’t know how this blew away £100 million?! This has left so much more to be desired to the point that Hollywood should just stop knocking on the anime door as it is never going to work out. Not for the anime, not for the numbers and certainly not for the fan who are left with such a travesty.

With the direction of this movie it did feel like there was trying to fill the ghost in the shell, and a rather empty shell at that.

Do not support this trash! I go as far as to not put a link to find it on Amazon just go give you some hassle not to buy it! Not even worth the bargain bin and certainly not worth the title of the name. 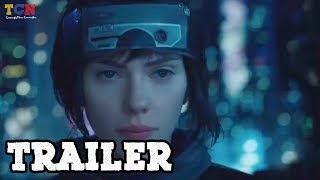